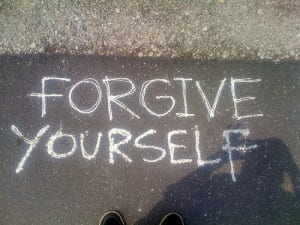 “The Lord is compassionate and merciful, slow to get angry and filled with unfailing love. He will not constantly accuse us, nor remain angry forever. He does not punish us for all our sins; He does not deal harshly with us, as we deserve. For His unfailing love toward those who fear Him is as great as the height of the heavens above the earth. He has removed our sins as far from us as the East is from the West.” (Psalms 103:10-12)

You hear that voice in your head telling you how disgusting you are? How worthless you are because of the things you have done to hurt other people? How much of a failure you are for continuing to make choices for your life that bring guilt and shame?

These adjectives would never come from the lips of your Father in Heaven. These are the whispers of the accuser. If you are experiencing self-hatred or anger towards yourself that is stopping you from moving forward with your life- you are not alone! But, I want to make something very clear… you and I have already been given the Victory! We are already forgiven! We already have the very thing we so desperately want to experience!

I love how Pastor Bill Johnson puts it, “The devil doesn’t mind negative attention. He’ll let us chase him all day long in the name of “warfare.” But it’s a place of weakness. God calls us into a place of strength. Spiritual warfare must always begin from a position of victory. We do not fight for victory, but rather we fight from victory. The difference is significant. When we are trying to fight for victory, we place a heavy demand on ourselves. If our prayers, confessions, declarations, and various spiritual warfare strategies do not overcome darkness, we call it defeat.”

Forgiveness is a spiritual issue, therefore it must be approached using a spiritual perspective. Christian and non-christian scholars and scientists not only agree that forgiveness is important, but that it is actually vital to our health. Neurologists and psychologists all over the world have done research to identify not only the effect that forgiveness can have on the brain, but the detrimental effects of bitterness, hostility, and unforgiveness. I am particularly interested in a recent study done by several Italian researchers who titled their study, “How the brain heals emotional wounds: The functional neuroanatomy of forgiveness.”

From their study: “Being offended or harmed hurts. Victims of wrongdoing may feel emotional pain, anger, and the desire for revenge toward their offenders, and may also engage in retaliatory behavior. Forgiveness is a cognitive and emotional process that eradicates chronic hostility, rumination, and their adverse effects.” These researchers found, through the use of fMRI (functional Magnetic Resonance Imaging), a machine used for brain imaging, that there are significant “real-time” changes that occur when we choose to forgive an offender. The fMRI data demonstrated a change in brain network connection during the process of practicing forgiveness verses remaining in a state of unforgiveness.

This study, although not faith-based, supports Romans 12:12 which says: “… be transformed by the renewing of your mind…” Your physical brain changes and experiences “renewal” when you choose to forgive.  Learning to forgive yourself is not about about forgetting. We may never be free of the actual memory of a painful event, but we can be free from the pain and anger associate with memory. Forgiveness is about setting the offensive, dark behavior and all of the emotions associated with it in front of the Father of Lights (James 1:17 ESV). Darkness literally cannot exist in the presence of light. Unforgiveness is a form of negative pride that can keep you in a state of constant victimization. It always causes division, alienation, and anger. Unforgiveness tends to cause us to want to “punish ourselves” further, as if the shame and guilt that come from the event that caused us to feel hatred towards ourselves wasn’t punishment enough. When we forgive ourselves, it does not justify what we have done; it does not condone or excuse our sin. But, you cannot forgive and love others without fully forgiving and loving yourself. When we sin, the enemy wants us to choose to view ourselves as the “victim”. We can seek revenge against ourselves, choosing to retaliate against self-healing and sabotage our ability to experience forgiveness and freedom. Forgiveness destroys this broken self-image and restores us to our right, intended identity through Grace.

2. Why do I struggle to forgive myself?

Isn’t it interesting that we are tempted to and will actually fight to hold onto unforgiveness towards ourselves?Dr. Charles Stanley offers three reasons why we choose to cling so tightly to our guilt and self-condemnation:

The primary cause is unbelief—prioritizing feelings and human reasoning above the truth of God’s Word. Scripture says Jesus bore the penalty for our transgressions (Rom. 3:23-26). But those who hold onto guilt are basically saying, “No, my sin needs further punishment. I must suffer for it until I feel I can forgive myself.” Aren’t you glad God doesn’t place such a terrible expectation on us? When Christ died on the cross, He said, “It is finished” (John 19:30). No further payment is required. How we feel has nothing to do with the reality of what He accomplished for us.

Perhaps the failure to live up to our own expectations is what causes us to berate ourselves. However, when we are so disappointed that we can’t forgive ourselves, we’ve set up a standard based on performance. This is called legalism. The Lord gives only one qualification for receiving His forgiveness: faith in Christ. To say, “What I did was so bad that I cannot forgive myself,” is to live under law, not under grace. God’s forgiveness is not distributed on the basis of a rating system for sins, and ours shouldn’t be either.

Tragically, after living under self-condemnation for a long time, believers can begin to see that as a normal way of life. But it’s not. Christ promised us freedom from guilt along with the abundant life that accompanies a cleansed conscience. To refuse this is to remain in a prison of our own making. Penal institutions have a word for inmates who have become so acclimated to prison life that they’re afraid of trying to function outside: they are described as having become institutionalized. That’s exactly what happens to believers who won’t release their guilt. They huddle in their cell, even though Christ has thrown open the door and invited them to step out into the freedom He purchased for them.

3. How can I forgive myself?

You and I must choose this. It is a constant decision, sometimes daily, until we have changed our self-perception. If we choose to do something that brings feelings of shame and guilt, we must choose to confess it and accept the Love that “covers a multitude of sins” (1 Peter 4:8).

Pay attention to your thoughts! We have thinking patterns in our minds that can be cyclical. Imagine a “film-reel” that rotates over and over with individual frames to produce a clear, fluid picture. Our minds are like this. We sometimes make choices or experience things that cause us to get a “distorted picture” of ourselves. We must “stop the reel”- inspect individual frames that may be damaged or distorted- and replace them with a new, fixed frame. In therapy, we call this “cognitive re-framing”. This is a psychological technique that consists of identifying and then disputing irrational or maladaptive thoughts. Reframing is a way of viewing and experiencing events, ideas, concepts and emotions to find more positive alternatives. I referred to this process in a previous blog titled “2 Ways to Fix your thoughts”.

1. Stop and acknowledge the negative thought (i.e. “I am a failure. I deserve to to punished”)

2. Repent and Re-frame it (i.e. “I am genuinely sorry for my choices. God has already forgiven me! I accept Jesus as my Savior and believe in the Word of God. I choose to believe that if I repent and turn to God, my sins will be wiped out and I will experience His refreshing! (Acts 3:19))

3. Practice the re-frame over and over until it becomes the automatic thought.

To again quote Stanley: “Stop replaying in your mind the old recording of your sin, which stirs up guilt, but instead replay the truths of God’s Word.” Forgiveness is a choice that takes courage and strength. If it was easy and we could do it on our own, we would have done it already. The healing that is possible brings peace and freedom that you never thought were possible.

Jesus, I know that what I did was wrong. Please forgive me for _________________. You say in your word that you see me as a new creation! You have given me Victory over the enemy and have empowered me to take authority over my thoughts and live as a victor instead of a victim! Help me, Jesus, to see myself the way you see me. I need help to change my thoughts and renew my mind. Give me the strength to live in my new mindset. Thank you for giving me freedom from guilt and shame. You are a good, good Father! Amen!