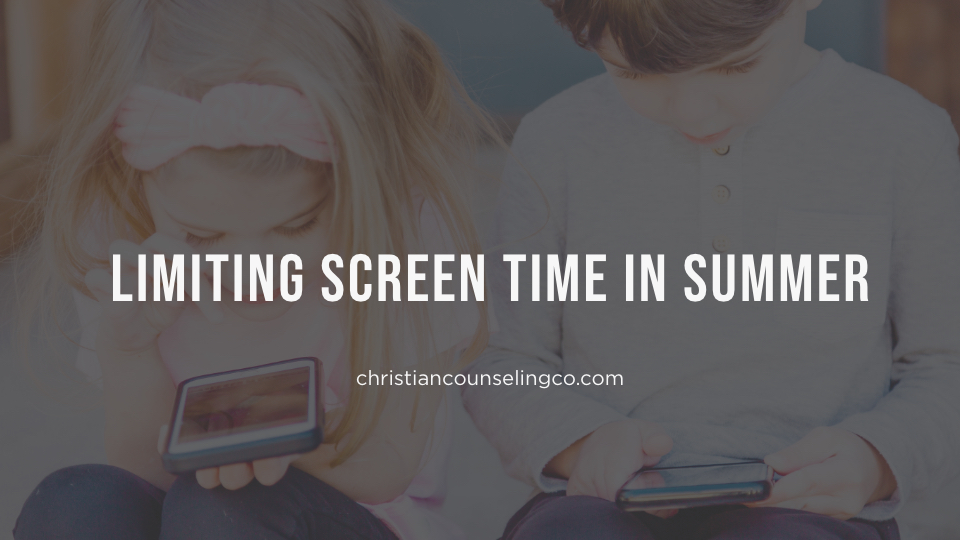 Technology, smart phones, Netflix, social media.. it is all here to stay. So, the question is:  “Will limiting screen time in Summer help my family feel more connected? How can I live in greater unity with my family this summer instead of having to compete with the disconnection that so often results from excessive screen use?”

When I think about summertime, my mind is flooded with images of barbecues, pool time, playing in the sprinklers, outdoor concerts, hiking, chasing fireflies, and lots of family time in the sun. But, until we create some important family boundaries regarding screen-time, summer will pass by with limited face-to-face, meaningful connection time.

Psychology Today quoted some research from the market-research group Nielsen:

These numbers are staggering, but it is consistent with what I often see in many of the families that I work with. As a society, we are missing out on so much as we ironically “tune in” in fear of missing out.

I recently came across a refreshing article called ScreenTime: From Tuning In to Turning Towards, written by therapists and master trainers, Don and Carrie Cole of the Gottman Institute. They offer some practical and helpful ideas about intentional family connection time.

Here are some great ideas for change that were offered to the family they highlighted in the article:

Allow everyone to weigh in on the conversation
While it is the parents’ responsibility to ultimately set the limits, children often respond best when they have a voice in the conversation about what is important to them.

Agree on some simple things
Begin small and perhaps agree to have some time when everyone is to be without phones or screens, such as family dinner.

Make memories as a family
Plan weekend activities that are interactive and fun for everyone. Take a trip to the zoo, or a museum. Go for a hike in the woods. Learn how to kayak or go skiing. Try incorporating a game night as a family ritual.

Use social media to connect with each other
Technology doesn’t need to be the enemy of connection. Try sending each other daily text messages as a way of connecting. Or share links of interesting or funny videos or social media posts.

Be kind to each other
If there’s a conflict, or the screen time plan doesn’t seem to be working, take a deep breath, be kind to each other, and begin again—without criticism, defensiveness, or contempt. Sometimes it takes a few attempts to work out a compromise, so be patient with each other through this process.

Validate your child’s feelings
If a time limit is agreed upon and your child goes into meltdown or rage when the time limit has been reached, validate their feelings. “You seem (angry or disappointed) about the screen time limit. Tell me what’s upsetting you.” If they respond by saying that this is unfair, then suggest that they bring it up at the next family meeting. If they agreed to it during the first family meeting remind them of this. Then ask, “Since this is the way it is right now, what would you like to do instead?” Empathize but don’t back down or capitulate. Make sure that the consequences of that behavior have been discussed ahead of time.

What great ideas! Some of these seem simple and obvious, but less and less families are making time for these practices. Which of these could you try with your family in the coming weeks? Start by introducing one of these recommendations at a time and watch as your conversation becomes more meaningful and your connection time becomes more rich!

Are you interested in learning more about technology and relationships? What are your thoughts about doing a “digital detox” this summer? Check out some more ideas from a past Cornerstone 5-part blog series called “You’re Missing Out” right here (part 1, part 2, part 3, part 4, part 5).