The story of Dakota Hawkins was one of the most difficult stories I wrote about in my book. The hardest part of being an author of nonfiction is having absolutely no say in how the story ends. It’s a helpless feeling, really, to want so badly to write a story away from bad, away from heartache and tragedy, but sometimes, there’s no other way. And before sharing any part of Dakota’s story with you, I need to say this: his story is one of undying faith as this family follows a God-driven path. Sometimes there were no answers for what they went through, and other times, God provided every needed answer. Just like any prayer, some are answered while others seem unanswered. But they never are. There is always an answer, a reason, and this family personifies that unwavering faith.

“Dakota authored his own story as he lived out his faith through four years of fighting a rare leukemia with valor, selflessness, strength, and love,” Dakota’s parents, Sharon and Henry, wrote about their son.

In honor of Dakota’s passing, Sharon became involved with two other moms who lost their children to cancer and started a non-profit organization called the Keep The Faith Foundation. This is what I want to focus on. After the deepest sorrow a person can ever, ever experience – the loss of a child – this family rose above, with God’s help and guidance, and helped start a foundation to help other families going through the same battle they once fought.

The Hawkins family is one of the most selfless, courageous families I have ever met. A few years ago, I traveled to Cabot, Arkansas, to meet with them. We chatted about Dakota, laughed about their fondest memories, cried, talked until after midnight. I was heavy with an emotion I couldn’t even describe that night. I’m still not quite sure how to describe it. Maybe it was an overwhelming awareness that such strength and faith could be had in such trying times?

During Dakota’s first hospital stay after diagnosis, he drew a picture of Doc, his favorite dwarf, and cited the Bible next to him: “I can beat it. I can do all things through Christ, who gives me strength” – Philippians 4:13

Excerpt from book: Sharon’s eyes welled up when she saw the picture. She immediately thought of the time Dakota had brought his small New Testament Bible to show-and-tell in kindergarten.

“How many of you go to church?” he had asked his classmates, holding the Bible into the air. A few kids raised their hands, most didn’t, some looked around, uneasy. His teacher, Mrs. Melder, who attended the same church as Dakota and his family, stood in the corner, watching, smiling.

“Well, if you don’t, you should consider it,” Dakota finished and sat down.

What incredible faith Dakota had at such a young age. And at the age of 11 and just diagnosed with cancer, his faith remained in God. That faith remained powerful and ever-present, and stayed at the forefront of every difficult moment, every decision, every bit of hope. Even during remission and relapse, God was at the core of this family’s journey.

And shortly before Dakota lost his battle to cancer, he and his family traveled to Jerusalem for one last experimental treatment. It was there that Dakota became at peace with his fate.

Excerpt: Dakota’s transplant, his last chance, was the next day, and as they walked quietly from the church and into Jerusalem’s warm, promising air, Dakota sat without a word on the steps outside the church. Henry and Sharon looked at each other and tugged at Riley’s arm, motioning him away. They gave Dakota the space he needed, the quiet he craved in that very moment where, though she will never know for sure, Sharon assumed her son was talking with the Lord, praying for His healing, moved by the burden Christ must have felt when kneeling at that very rock the day before His crucifixion.

Elbows resting on his knees, head in his hands, Dakota looked out over the old City of Jerusalem and wiped his tears.
“I want to be with Jesus,” Dakota said.

And though there is never a way for a parent to be ready to say goodbye to their child, Sharon never stopped looking for the reason why she had to.

Excerpt: From the day he took his last breath in Sharon’s arms, she struggled to see that reason – struggled to recognize God’s plan, to know His intentions, to understand His purpose for Dakota in the lives of others. But she never doubted.

Less than a year later, she became involved with the Keep The Faith (KTF) Foundation in memory of Dakota and two other children who lost their lives to cancer, as a way to keep the spirits of those children alive and to carry out what she believed was their purpose – to help other families with what hers had already been through.

The foundation raised more than $100,000 in its first six years. The foundation’s annual Pennies from Heaven drive is the organization’s biggest fundraising event. I have put collection jars in many local restaurants/coffee shops/salons/etc. and have raised almost $300 from people’s leftover change.

I hope you will read Dakota’s story, hold it sacred as a reminder of the power of faith, and be inspired to help others. If you’re interested in learning more about the Keep The Faith Foundation or donating your spare change to the Pennies from Heaven drive (which ends in just a few days!) please visit www.ktf.faithcabot.org 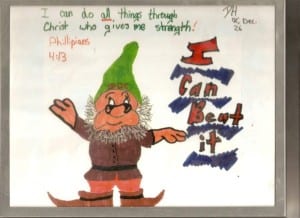