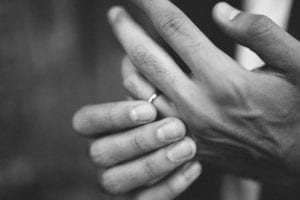 Do you or someone you know feel like giving up in your marriage right now?

There are dozens of couples who come through our doors every week, struggling just to survive. Their connection is threatened and strained and their sense of happiness has dwindled because of what feels like constant miscommunication and fighting. They are weary, broken, and hanging on by a thread.

Survival mode causes us to engage in “war” from behind our own walls of protection, seeking to find some way of connecting with our spouse, but ironically causing greater damage to them as we seek to defend ourselves.

After the “D word” is thrown around a couple of times in the midst of conflict, couples begin to feel any glimmer of hope that was present, fading fast.

Trust has been fractured, feelings have been minimized, boundaries have been crossed, and respect has been lost.

Marriage is a God-designed, holistically intimate, sacred uniting of lives meant to give honor and worship back to God. Because of it’s powerful potential, it is top priority for the enemy… it’s prone to major attack. All marriages are under fire, as the darkness seeks to steal, kill, and destroy what God created to bring abundant life, community, and impact! An article in Christian Counseling Today called marriage, “one of the most significant relational investments anyone will ever make.”

Many couples struggle to believe or trust that bringing everything out into the open could recover something that feels so completely devastated. But many couples do notice that small sense of hope within them that wants to fight for healing and is curious to see what might happen if they are able to commit to the process. The trouble is that these couples have had their trust severely undermined, threatened, or damaged.

Dr. Steve McSwain contributed an article to the Huffington Post about the importance of Jesus’ beautiful “mustard seed” metaphor:

“When Jesus said, “If you have faith no bigger than a mustard seed…” (Lk 17:6) he was not saying faith comes in varying quantities, as in 16 oz. sized faith, or 32 oz. or super-sized. Yet, this is how so many religious people have mistakenly understood his words.

So, what was Jesus really saying?

The capacity to believe — or, a better word here is “trust” — the capacity to trust is a Divinely-endowed capacity. I suspect, as do many others, this capacity is written into the genetic code of your DNA. As that capacity is reinforced by caregivers and others, it naturally grows… it expands, just as the mustard seed germinates and grows into a Mulberry tree. Infants and children who come into this world, for example, come endowed with this believing capacity in tact. Which is why they are not only totally dependent but completely trusting. Undermine that trust, however, and this natural capacity to believe — to trust — is weakened, harmed, or hindered. In some cases, the damage can be so severe, it may take nearly a lifetime to restore.”

Many of us have had our trust broken in various ways growing up. This damage can cause us to react to our spouse with defensiveness and a desire to “protect” ourselves in the midst of conflict. We struggle to be vulnerable and open in our communication because the lens of “mistrust” that we adopted growing up, is informing our current situation. This is one of the most important places where healing needs to happen!

I asked Sean Taylor, our founder and director here at Cornerstone, a couple of questions to help guide husbands and wives who are wrestling with the idea of divorce; here was some of his professional advice:

What would you say to Christian couples who are considering divorce?

Sean: “I would say don’t follow through with it until you have been able to bring everything out into the open. Give yourselves the opportunity to ask questions like, ‘How did this even happen? How did we get to this point? What patterns do we see contributing to our disconnection?’

Trying to understand these answers as well as the origins of their conflict, before they act on it with such a life-changing decision. I have found that even if they do end up following through with the divorce, there is at least some understanding present, so that the behavior doesn’t repeat in future relationships and the sense of regret is minimized.”

Can you speak to situations where couples have come in, wanting to give up and the work you have been able to do with them? Have you see couples survive the “D word” and restore their marriages?

Sean: “I’ve seen multiple couples come in over the years for counseling not only reconcile, but thrive in their marriages after the threat of divorce. They typically come in saying things like, “We just want to make sure that we have done anything we can to salvage this” or “We want to give this one last shot” and I have seen God use a mustard seed’s worth of curiosity and hope in mighty ways!

He uses that small measure of hope to build upon, and it’s the openness of these couples that He uses to redeem their relationship. They open themselves up to the process and I have seen God do amazing, miraculous things. I have seen tons of marriages be redeemed just when they think that it’s their last ditch effort. I have seen them enter into a brand new, resurrected relationship and actually thrive.”

We are here for you.

We have professional, kind, equipped, compassionate, knowledgable marriage counseling therapists who have seen marriages in crisis move into a place of immense thriving and deeper intimacy than they’ve been able to experience before.

Lord, I pray that you would move in the hearts and minds of every person reading this. If they, or somebody they know and love is suffering in their marriage, I pray for doors to be opened that would lead to reconciliation, healing, and transformation for them and their spouse. Protect their hearts, Jesus. Give them wisdom in this process. Help them to know that they are not alone; make your presence known to them. Thank you for your grace. In your mighty name, Amen.